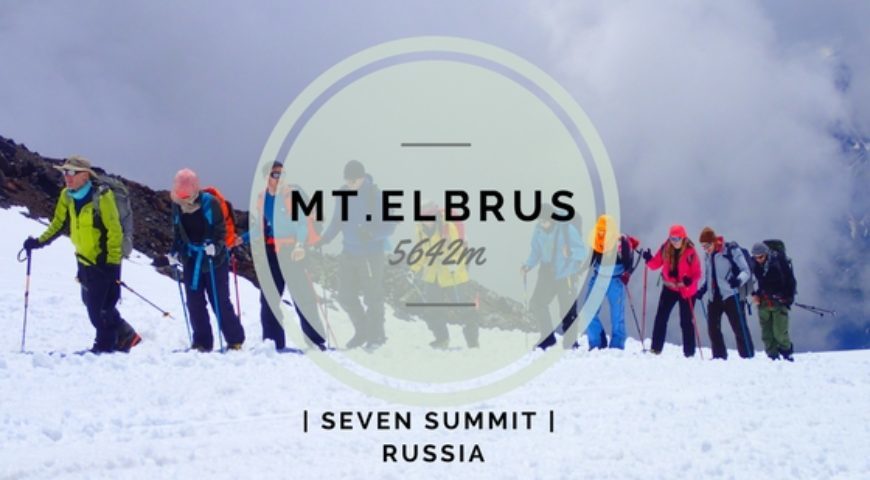 THE HIGHEST OF RUSSIA

After climbing Kilimanjaro (5895m) THE ROOF TOP OF AFRICA last year in Aug2015 which was my first Seven Summit.

Where would I climb next was the question? Then though of MT. ELBRUS (5642m) – Russia’s which is highest mountain and also the highest in Europe. It is also the tenth most prominent peak in the world which is part of Caucasus Mountains in Southern Russia, near the border with Georgia.

Journey to Moscow via Doha from Singapore

All my bags were packed and  ready to board the Qatar which was a transit via Doha, first time experiencing the long flight I ever took and a bit nervous to fly. The flight was delayed for a while at Changi Airport and finally landed with a shorter transit time whereby we had to rush to the connecting Moscow flight. Finally when landed at Moscow cleared the immigration and only found out that the baggage has been delayed at the Doha airport due to short transit period. Unfortunately with no baggage managed to get a taxi to the city of Moscow and checked in the backpackers.

Hotel Winterfell, a pleasant backpackers with some nice dorms. Accommodation’s in Russia isn’t pretty cheap. The rooms were well kept and the staff was very friendly explaining all the details of attractions around. I step out for some local nightlife for some drinks and food. Amazed to find that the bars here offers a very cheap drinks and great music. After chilling out for a night set back to room for sleep for the next day adventure.

After having a nice breakfast in the early morning made my way to the airport to catch my domestic flight to Mineralnye Vody. My adventure partner Vitaly picked me and the rest of the group members at the Mineralnye Vody airport. It was one hell of a hot day. From the airport we headed down to Terskol which was a 3hours drive. The journey along the way was scenic and the landscape of caucasus mountains. Finally we checked into the most amazing cottage with a beautiful view of Mt. Elbrus through the windows. We went for our dinner and called it a night to get some good rest after our long journey from the trip.

It was around 8am when we got up and had our breakfast serving some local soup ,Russian blinis (pancakes) & Kasha (a type of porridge made from different grains). It was delicious and yummy. At around 10am we gathered for briefing and started our acclimatization hike from 2100m, Crossing the valleys and bridges near to one of the army training grounds. The trail took us to the valley of flowers where nature stood so beautiful.

After a 3hours hike up to the Devichi Kosy Waterfall, to witness the beauty of the falls was really amazing. The whole area was filled with the mist of the waterfall and it was damn cold. We took a break over there and had our packed lunch. After a rest we started to head down back to the Terskol village. Most of them found the acclimatization hike very amazing with the landscapes. Some of us went to shop some groceries for our next day hike. During our dinner Vitaly our main lead guide briefed us on the next day program and things to pack. We met our other Team Members like guides and chef for our adventure. All were very pretty much excited about the next day program.

Ascent to the mountain huts (barrels) at 3800m

It was the day when we heading up to the barrels at 3800m. We packed all our items required for the hike and the rest let in the hotel. Drove to the Skilift place and we started to rent our gears from the shop. The rental wasn’t cheap and most of the gears were in good conditions. After sorting out all the gears we took the cable car to the nearby station to the hut which we had to transit 2 times, and then finally take a snowcat to the barrels.

After reaching barrels we unpacked all the gears and bags and rested at the guesthouse. We had to share 8pax in the guess house which was much warmer than the barrels and the facility was much better. We packed our day pack and grabbed our snow shoes for another acclimatization hike up to 4100m. The weather seemed to be gloomy and cloudy. As it was my first experience to wear snow shoes and hike up on the snow, I found it hard at the beginning and was uncomfortable with the shoes. After a bit of experience finally i got used to it. It was much harder at the beginning to walk on the snow surface as we need to dig in all the time when we step which consumed more energy.

Around 2 hours later with a slow pace we reached the mark of 4100m where it started to snow and we had to descend down back soon. The weather up in the mountain is hard to judge but our professional guides were always monitoring the Summit window. Unfortunately we got a very short period of summit window and we had to all prepare for it. Finally we managed to descend back to the guesthouse. Our Chef had already made some good food which was warm enough for our body. We had a good talk over the dinner and discuss on the next day program which was an another acclimatization up to Pastukhova Rocks (4800 m). It was time to call it a night.

Considered as one of the most difficult hike for the day, ascending from 3800m to 4800m with an altitude gain of 1000m, it was breathless and tiring. But that’s what we sign for to climb where mountains are not easy.

We started with a gradual walk from 3800m and after reaching the 4200m the weather seemed to be bad as it started to snow. We have yet to reach the mark of 4800m. Slow and steady we managed to push ourselves up the steep slope. Every 100m took us an hour to ascend from there and we were feeling breathless. One had to turn down and rest we kept pushing themselves up. With all the effort and bad weather we managed to reach the 4800m mark. It was a great day of acclimatization. Finally we descend to quick as the weather was getting bad.

We sheltered back at the guesthouse with some warm tea and food. Some hit the bed right away after their meal. It seems going higher and higher seemed too difficult and the unpredictable weather made it even more challenging. We hit our sleeping bags and rested for the night.

Finally it’s a day to rest and learn new things. The most important things on hiking on snow surface is to learn to gear up with proper equipments and also to learn on how to use it in case of emergency. Our experienced guides Anastasia & Katerina who were leading us showed us on how to tie up the crampons and make the right use of Ice Axe. During every fall we need to remember to keep our legs up in the air in order to avoid hurting ourselves from crampons.

Safety being the top priority while hiking is always a good thing. They also thought us how we would rope up on the ridge in case necessary. We learnt some basic knots which will be tied and roped up while on the summit day. It was a great day to rest and relax and be prepared for the big day tomorrow. Some were nervous and excited at the same time it’s the day that will test our endurance and limits of our body.

Finally the time has arrived to put all the week’s effort on this day, to put the ability to test the endurance. WE all geared up with our equipments and food at 2am we setup for a snowcat ride. Due to the short window period and bad weather the team decided to use the snowcat till 5000m from the barrels. Later after 45mins of ride we setup our food on the snow and started to walk in the pitch black. There were a lot of hikers on the day even with the bad weather.

Our main team leader Vitaly had split the groups into 2 the fast pace setters pushed up first making the trail marks. The second group we followed trough and pushed through the steep slope. At around 6am we reached the place called saddle with a short break the mountain ahead looked with a long human chain trying to ascend the summit. The first group were already ahead of us on the slope. The slowly we started to walk up towards the steep slope it took much longer than we expected due to long chain finally we managed to overtake some slow people and headed towards summit. The view from there was amazing as we could see the clear view of the summit ahead to us. Be there on top was amazing with a few more meters of distance all made it to the summit around 7.30am. The sky had cleared and we got a very good view from the summit. Finally beginning on the roof top of Russia was accomplished and I reached my second seven summit.

After taking few pictures our guides asked us to rush down as the weather was turning bad. We took few hours to descend and all reached safe back with an 100% summit rate. This was a very adventurous trip with great company people from US, Canada, Dubai and Singapore all had achieved their dream of being on top of Mt. Elbrus. Without the support of our Guides it would have been hard. Finally we packed all our stuffs and made way down to Terskol Village via cable car. Finally it’s time for celebrations for all the team effort we had. 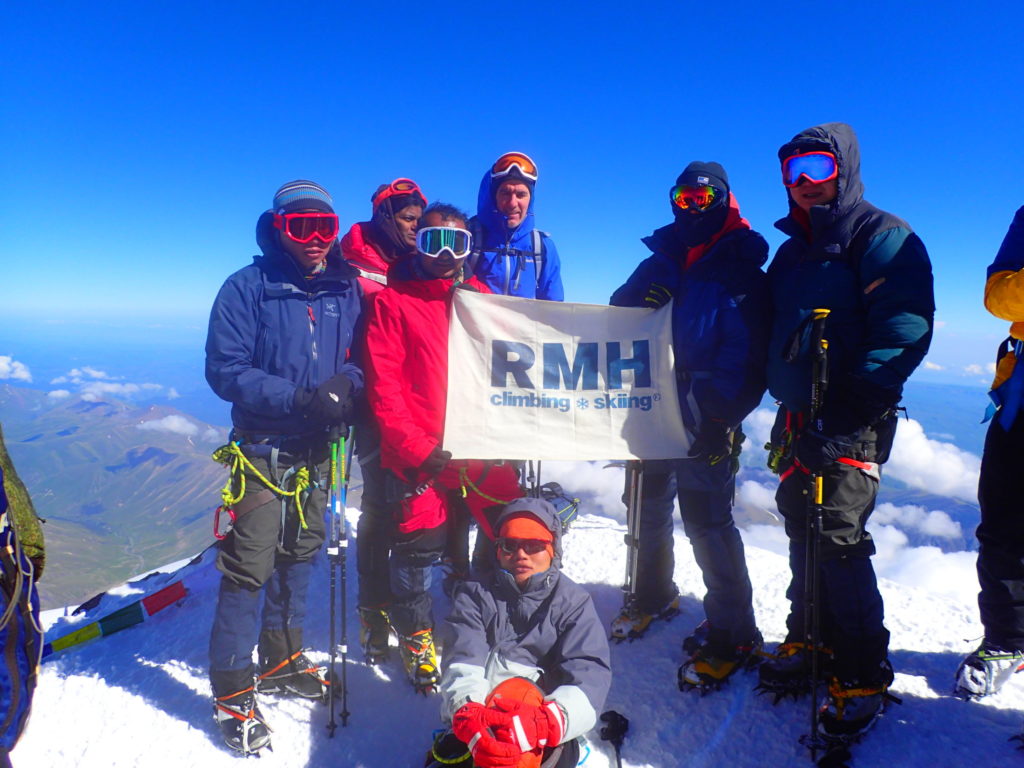 EVERY MOUNTAIN TOP IS WITHIN REACH IF YOU JUST KEEP CLIMBING 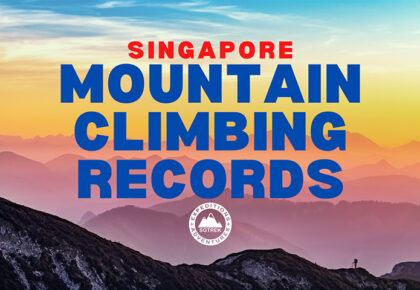 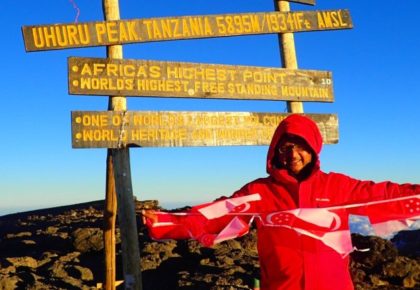