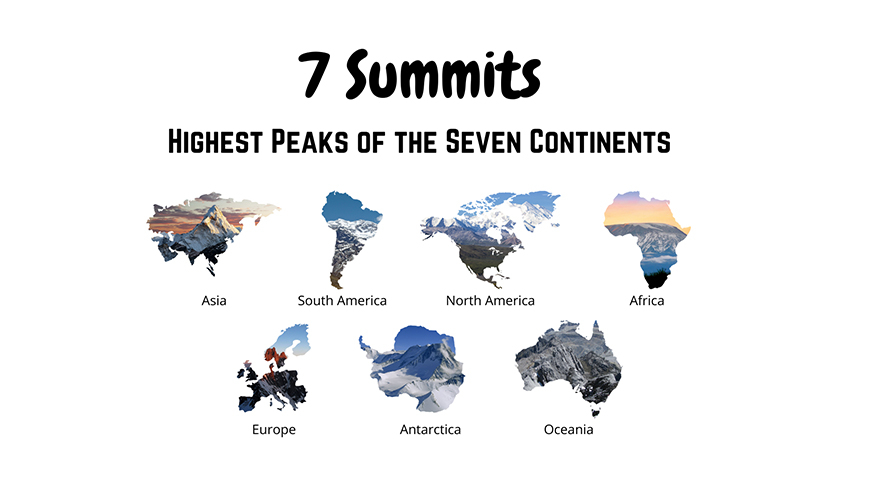 Mount Everest
Mt. Everest, 8848.86 m is the highest peak in the World. Located in the southern part of the Asia continent, Mt Everest is a dream come true for hundreds of mountaineers around the World. Join us for a thrilling adventure to the top of the World, Mt. Everest.

Cerro Aconcagua
Cerro Aconcagua, the highest peak in the Western Hemisphere, in the continent of South America has an impressive altitude of 6961 m. Located in Argentina near its border with Chile, Aconcagua is part of the Andes Mountain. With its name derived from the native language of the Inca Civilization, the mountain is also believed to have its origins in Volcanic Activity, however, it is not an active volcano.

McKinley (Denali)
Mt. Denali is the third highest peak among the Seven Summits at an altitude of 6194 m located in South-Central Alaska in the North American continent. Denali was formerly named Mt. McKinley after the president William McKinley but was later officially named Denali by the Department of Interior. Denali has two prominent peaks: the south Summit being the higher one at 6194 m while the North Summit at an elevation of 5,934 m. The first ascent to Denali was made on June 7, 1913, by a team led by Hudson Stuck and Harry Karstens along with Walter Harper and Robert Tatum.

Kilimanjaro
Kilimanjaro, the highest peak in Africa, is believed to have its name derived from the ancient Swahili words “Kilima” meaning the mountain, and “Njaro” meaning “Shining”. Kilimanjaro is the highest free-standing mountain at an impressive height of 5,895 m from sea level and 4,900 m above its plateau base. It is also the fourth most prominent peak with a prominence of 5,885 m. Kilimanjaro is a dormant volcano with three peaks namely, Kibo (5895 m), Mawenzi at 5149 m, and Shira at 4005 m. Mawenzi and Shira are extinct but Kibo still has the chance of eruption in the future.

Mount Elbrus
Mt Elbrus is the highest mountain in Europe that is located in Russia at the Georgian Border with an elevation of 5642 m from sea level. Mt. Elbrus is a dormant volcano with two significant peaks, the western being the highest at 5642 m and the eastern summit at 5621 m. It is the tenth prominent peak with the prominence of 4741 m. It is believed that Elbrus got its name from the Turkic people of the Caucasus region.

Mount Vinson
Mount Vinson, is a recently discovered peak, which is part of the Sentinel Range of Ellsworth Mountains, in the Antarctica Continent. Mt. Vinson is the prominent peak in the Vinson massif with 5 other subsidiary peaks. The peak was named after Carl Vinson, who has significant roles in the exploration of Antarctica.

Carstensz Pyramid
Carstensz Pyramid is the highest peak in Indonesia in Oceania. It is popular as the highest peak on an island with an elevation of 4,884 m. It is also the highest point between the Himalayas and the Andes. It is locally known as Puncak Jaya meaning Glorious Peak in the Indonesian language, while the peak is also known as Nemangkawi in Amungkal, a trans-New Guinea language. The first ascent to this peak was made in 1962 by Heinrich Harrer, Philip Temple, Russell Kippax, and Albertus Huizenga.